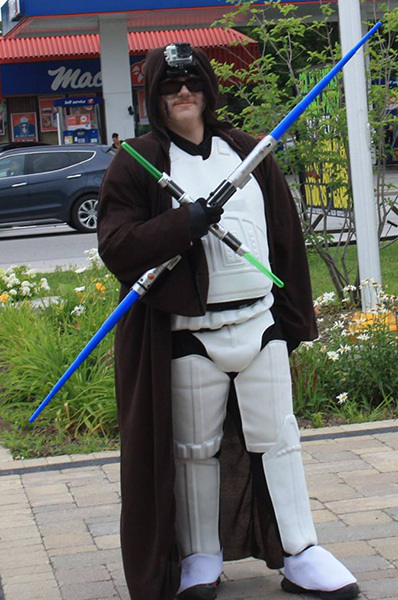 Vanya is a New York based designer, patternmaker, and costumer specializing in sewing and intricate needlework techniques. She has studied Fashion & Textile Technology at Buffalo State University, with a total of twenty years of sewing experience. The projects seen here are only a sampling of favorite projects.

Vanya has been part of the cosplay community for fun and competition for the past eight years, attending cons throughout the US and Canada. This includes competing in the Crown Championships Of Cosplay and Eastern Cosplay Championships, alongside many other competitions, with frequent placement success.

A.A. Jankiewicz
Agnieszka Ann Jankiewicz (A.A. Jankiewicz, but known to most as Agnes) was born in the midst of one of the biggest blizzards of the year on February 12th, 1988. Even in her earliest years, she loved telling stories in any medium she could get her hands on. As a young girl, she was heavily influenced by her father’s love of medieval history, Greek mythology and science fiction. Spending many summers in Poland visiting her grandmother, she was further enamoured with legends of castles, dragons and the Polish countryside filled with vast forests and limestone mountains.

Amanda Giasson is a Canadian freelance writer and the co-author of Love at First Plight, book one in the Perspective series.

Although Amanda provides the point of view of Megan Wynters in the book series, the world of Qarradune and its characters are the result of the equally combined creativity of Amanda and co-author Julie B. Campbell.

Beyond the Perspective book series, Amanda has always had a passion for fine arts, especially for creative writing. From an early age, she has enjoyed writing short stories and poetry and she holds a Bachelor of Arts in English from York University. In addition to writing, Amanda has always been a lover of dance, music, and acting, and has even dabbled in drawing from time to time.

Julie B. Campbell is the co-author of the innovative Perspective book series. The first novel in the series, Love at First Plight, was the result of fourteen years of a profound love for writing about Qarradune and all of the people who live there.

Although the books are truly a combined effort with co-author Amanda Giasson, Julie is the author behind the voice of Irys Godeleva in the Perspective book series.

Before deciding to share the volumes of the Perspective series with the rest of the world, Julie had previously published children’s books, including titles such as Finding Manda’s Sunshine, and The Elephant-Wolf.